Social conformity - How likely are you to bend under peer pressure? 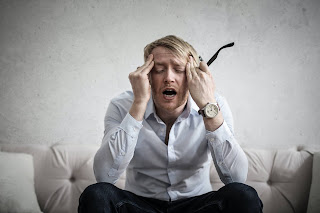 How likely are you to change your opinion about something when the mass around you have a different opinion about it? Have you ever been in a situation where you didn’t like a person when you met him individually but end up liking the same person when he was introduced to you by your friend who thinks that the person is cool to hang out with? How often have your opinion been changed about a thing after you realize that everyone around you thinks otherwise? As one expert in teen violence put it, “The stupidest creature to ever walk the face of the earth is an adolescent boy in the company of his peers”. You might have noticed that your speed limit varies according to the passenger you have on the backseat of your car. If this isn’t the case of change of behavior due to peer pressure, then I don’t know what is?

To understand the effect of peer pressure and social conformity let us look at an experiment conducted by Solomon Asch in 1951 to check the extent to which the people would conform under the application of social pressure by the majority group. The Experiment is famously known in the world of psychology as “Asch’s Experiment”. 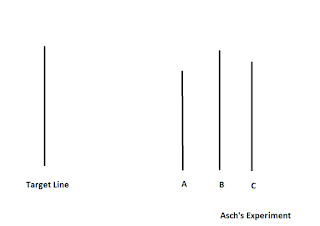 The experiment consists of a board with 4 lines drawn on it. One of the four lines is the target line and the subject is asked to state aloud which among the other three lines (A, B, and C) is most likely the target line. The answer is always obvious. There were a total of 18 trials (i.e. a total of 18 boards with lines drawn on them). A subject is placed with 7 confederates (people hired to facilitate the experiment) who have agreed in advance what their answers would be. The subject is not aware of this. In a total of 18 trials, the confederates gave the wrong answers to 12 of them. The purpose of this experiment was to check if the subject will conform to the obviously wrong opinion of the majority.

The most startling fact here was that even when the answers were completely obvious, almost 3/4th of the people still complied at least once with the wrong opinion of the majority. Imagine the power of peer pressure and social conformity in the case of uncertainty where we don’t have a clear opinion about something (Social Proof under uncertainity). As Elliot Aaronson puts it “We are social animals, we don’t want to go against the dynamics of the group which might make us feel left out from the group.” Which side do you think you would have been in, 75% or 25%?

May 31, 2020
The "Association and Dissociation" Technique
Benefits Neutralize Experiences of low to medium intensity.amplify the positive feeling or some positive experience that you had in the past. This exercise is not recommended for traumatic experiences Note : To understand this technique, we will perform an exercise. You don’t need any equipment to perform this exercise but it is expected of you to sit in a quiet place with minimal disturbances so that you can focus on this exercise.

June 17, 2020
Have you ever set a goal where you were really motivated at the start and eventually lost the interest/motivation to pursue it? This habit is not only hindering your goals but also decreasing your confidence in yourself. When the frequency of non-fulfillment of goals is increased, your sense of self-worth suffers, and you start thinking that maybe you’re not made for that work or maybe you are just an average human who is not made for non-average things. Today we will talk about a better way to commit to your goals. If this doesn’t work for you, it doesn’t mean that you are not good enough perhaps you need to understand that same jabs and hooks don’t work for all boxers and you should rather try to find the ones that suit your style.

June 04, 2020
To understand this, let us first talk about the “Confirmation bias” and the “Egocentric bias”.Confirmations Bias:The tendency of people to seek confirmation of their current beliefs and impressions.People generally tend to ignore the things that are against their current beliefs and tend to stick with the ones that support their belief system. That is people try to absorb only the information which fits in with the information they currently have.
1 comment
Read more

O.J
I write about things that people should talk about but they don't.